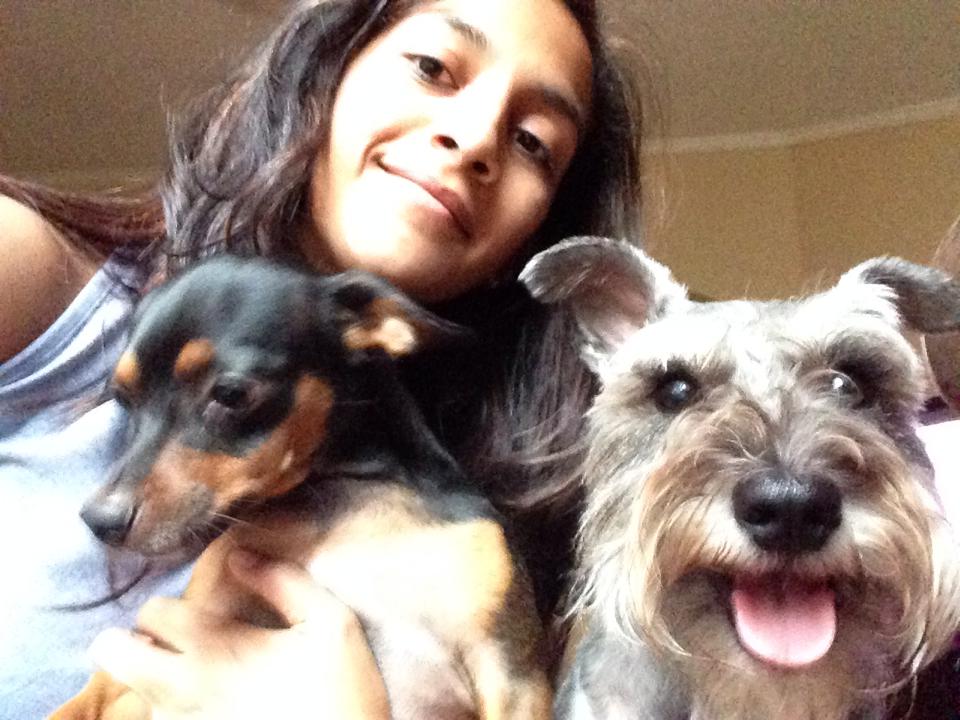 I hope I get the pleasure to meet you and your PowerPup soon but in the meantime, you can get to know us!

My name is Stephanie. I was born and raised in San Antonio which is now also the hometown of my new business, Pup Pup & Away.

As a kid, I knew I wanted to work with animals but I thought I was going to be something more like a veterinarian. My very first job was a receptionist at a vet’s office. I got exposure to really cool surgeries and dental procedures and learned some neat stuff. I actually almost passed out watching my first surgery, a pyometra. I don’t recommend looking it up if you’re a wee bit squeamish.  In 2007, I moved away from home (the first of my siblings to fly the coop) to attend Texas A&M (WHOOP!) and began a degree in Biomedical Science with the plan to pursue vet school. I lasted through my sophomore year. I ended up becoming more interested in the behavioral world of animals. I got a job with a vet/boarding facility and knew I was on a better path for me.

I realized my passion was with animal behavior and hospitality, particularly regarding the human and animal bond. I worked with some boarding facilities and began focusing more on the daycare portion of business for a few years. In 2012, I moved to Houston and began working with Peace Love and Dogs in their daycare department. In a few months I became interested in training. The co-owner, Stephanie Bennett, CPDT-KA, taught several obedience classes and allowed me to observe and help. Within 10 months I was teaching my own puppy obedience classes. I gained my certification as a Knowledge-Assessed Certified Dog Trainer. I deeply enjoyed my work and my job for 3 years. But soon, home was calling.

So this past February we packed up and made the move back to San Antonio where Pup Pup & Away was born.

Now, let’s talk about my PowerPups.

First, there’s Sully. He’s a Miniature Schnauzer and the apple of my eye. Seriously, the first words I said when I saw him were “he’s perfect!” He was born October 14, 2009, joined my family in December and has been my ride-or-die ever since. I got him during my junior year at Texas A&M, right during finals. He is named after the former president of A&M and a former Senator of Texas, Lawrence Sullivan Ross. It’s tradition at A&M to “put a penny on Sully” (President Ross’ statue) for luck on your finals or any big exam. Like any schnauzer, he has lots to say, especially to disembodied noises like car doors or voices of neighbors. He loves his girlfriends that he’s made from the daycares I’ve worked at. He really loves car rides and has kept me company on many road trips. He doesn’t like to swim, but he loves the beach and bobbing for treats in his baby pool. He is one of six current (and one of eleven past) family schnauzers. Yea, we’re crazy schnauzer people.

Then there’s Faye, the Chiweenie. She was born April 2, 2012. Named after an anime character by my boyfriend, she is very loving… once she gets to know you. If you’re a stranger though, she’ll make your ears bleed with her howl. Faye’s hobbies include cuddling under blankets and sunbathing for hours on end. She’s our little hot dog.

Let me also introduce you to one of Pup Pup & Away’s behind-the-scenes technical support, Jordan. Jordan began as a client in Houston, turned into a friend and is now using her years of creative and technical writing knowledge to help edit all of our distributed materials. She has two cats, Pedro and Winston, who are very much in love with each other. Jordan also has three dogs. Henry is a 10-year-old corgi mix who loves to chase squirrels more than anything. Miss Moneypenny and Bluebird are her two St. Bernards. Penny just turned three and is the attention-loving ham of the pack. Birdie will turn three in July and finds it impossible not to give her favorite people never-ending kisses. I have to give special thanks to Jordan not only for her editing work but also for the hours of entertainment I’ve gotten from her zoo.

So that’s the team. We’re looking for other PowerPups to join our squad. Will your pup hear the calling?