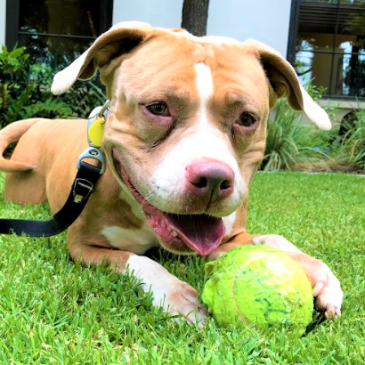 What do I mean about motivation? I mean the thing that makes your dog WANT to work. For you, it’s your paycheck. Regardless of the amount of love you have for your job, the one thing that keeps you going back is your paycheck. But for dogs, it’s not that simple. What you use as motivation is up to your dog, not you.

Most dogs are motivated by food, which in my opinion is the easiest kind of motivation to work with. But there’s also so much diversity in that category. Some dogs like peanut butter, others like cheese, or maybe hotdogs. Some of the most interesting things I’ve seen include frozen peas, Cheetos and Whataburger French fries.

Rare, but not uncommon or unusual is a dog who is not motivated by food but rather affection or play. Before determining that you might have one of these kiddos, definitely exhaust different food options. If your dog was motivated by food at home but loses interest while on the park or in class, it may just be that you need a HIGHER VALUE treat. But if you have a dog who’s interested in you rather than food at all times, then you most likely have an affection-driven dog. If your dog would do anything for his tennis ball but turns his nose up to your treat, then play is most likely your dog’s jam.

When training a toy-motivated dog, you first must teach your dog a rock-solid leave-it. It’s important to be able to get your toy back quickly in between reps so you can move on to the next. This can be a little tricky, because if your dog loves his toy, he may not want to give it up very easily. I also recommend using a toy that is elongated, like a rope or long stuffed animal so you don’t have to give up your handle of the toy every time. When working with these toy-loving pooches, sometimes I reward with a quick tug of the toy, and sometimes I reward by actually throwing the toy and allowing the pup a second to run around with it before asking for it back. Lastly, be sure that you somehow tuck the toy behind your back, under your arm or into your shirt and only bring it out once the desired behavior has been performed and marked (that’s where timing comes in).

Nothing makes you feel more like a superstar than an affection-driven dog. Because these dogs love to love, they may also be a little needy when not training. I would recommend teaching your dog some sort of “I’m done” cue (mine is wiping my palms against each other as if dusting off some crumbs) that when given tells your dog that you’re done dishing out affection and it’s time for him to move on instead of pestering. Also, keep in mind the level of your affection. If you’re trying to work on a stay behavior, you rewarding with exuberant praise may actually cause your dog to break the behavior instead of remain calm and in place. I usually tend to stick a simple stroke of my hand from the side of the snout to the head with an occasional ear rub and save my gushing for that last, really hard rep.

Remember, what your dog is willing to work for is up to your dog, not you. You can’t force a motivation upon your dog to make your life easier. You have to adjust to him. And just because you can’t use food doesn’t mean your dog is broken or can’t learn. Find what works for him and still have fun!